Benefit from the outstanding advantages of Poettersonden®

In comparison to  the obvious advantages of the Poettersonde®, conventional dynamic pressure probes have considerable deficits. The graphs above clearly show the difference between conventional pitot tubes and Poettersonden® and hence the dramatic quantum leap in measurement technology and mechanics.

When Poettersonden® are used,  no large pressure-induced detachment areas as with conventional dynamic pressure sensors emerge, but only an extremely low recirculation exclusively at the lee of the Poettersonde®, not causing any disturbance to the measured value. 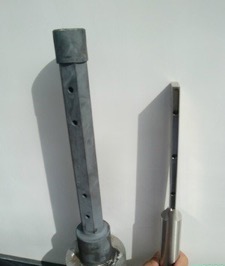 Due to unusable measured values, this sensor was removed and scrapped. The power plant incurred enormous costs due to welding, annealing of high-temperature steel and TÜV certification.

Right: A Poettersonde® for turbine steam

The removed conventional pitot tube (left) was replaced by the Poettersonde® (right), which has been providing precise measurements ever since. For the first time, the Poettersonde® made it possible to achieve an exact balance, accompanied by considerable energy savings.

The vortex and flow behaviour of a circular cylinder has been elaborately documented in scientific publications and can be transferred to conventional dynamic pressure sensors as long as the sensor profile is about the same length as the  width. Whether it is square or polygonal, oval or T-shaped, this metrologically negative vortex behaviour (Karmann's vortex road) hardly ever changes. Within the scope of research, the flow behaviour of all common sensor profiles was determined.

Heinz Herwig, "Strömungsmechanik A - Z", at the top of page 408:
"The influence of the Reynolds number may be strong in bodies with pressure-induced large separation areas, because the transition point (laminar/turbulent) and the separation point can interfere differently and therefore separation areas of very different sizes arise. […]. A typical example is the flow around a circular cylinder".

http://www.philippi-trust.de/hendrik/braunschweig/wirbeldoku/mahrla.html
"With a further increase in speed, another critical point will be reached. For most bodies it ranges from Reynolds numbers 2-10⁵ to 7-10⁵. From this point on, the flow separates turbulently from the body. In a turbulent flow around the body, however, the flow of the fluid adheres to the body for a longer time before it separates, forming turbulences whose direction is no longer predictable or calculable. As a result, the dead zone behind the body is reduced, and thus the area that hinders the forward movement. This results in an abrupt decrease of the cw-value (K-factor) to its minimum. For a body, this means the most favourable flow condition."

Visualization according to the wool thread method

In the following, the visualization of the flow behaviour of a conventional high-pressure steam probe compared to a high-pressure Poettersonde Type DF 10 probe under completely identical conditions using the wool thread method is shown.

Visualization: Conventional pitot tube according to the wool thread principle

Visualisation: The Poettersonde® DF 10 according to the wool thread principle

Conventional pitot tubes theoretically form the differential pressure to about 80 % from dynamic pressure (upstream side) and low pressure (downstream side) and to about 20 % from friction. In this consideration, however, the considerable influence of very strong vortex formation, which on the one hand does not change the negative pressure quadratically to the flow velocity and on the other hand is associated with an increased permanent pressure loss by the vortex brake, is missing. This almost always leads to pure energy destruction.Extreme vortices (Karmann's vortex road) of conventional pitot tubes also cause very strong mechanical loads, which often lead to vibration fractures despite the often required bearings (e.g. in the high-pressure steam range). Poettersonden® are hardly subjected to any mechanical stress and therefore never require counter bearings. So far, none of the frequently applied Poettersonden® have been torn off.It is often concealed that with conventional pitot tubes, the pressure absorption integrated for pressure compensation on the negative pressure side actually does not allow static pressure absorption. It is a negative pressure which does not change quadratically due to vortices and vortex brake. Significant measurement errors appear just made by only the distorted absorption of the static pressure in the vacuum chamber.

Poettersonden®: Poettersonden® (B x L = 1 : 3.5 with an immersion depth < 0.5 x D) in the form of swords or plates are not negatively affected by vortices at all. Around thePoettersonde®, an ellipse running to a point at the back forms an ideal flow profile (see visualization steam).

University of Magdeburg (research report):
There are no vortices in the inflow and side areas of the Poettersonde®, solely in the caster there is a small recirculation area. The resulting negative effects on the measurement result and on the stability of the probe are unlikely."

In contrast to conventional dynamic pressure probes, the resistance coefficient (K-factor) of the Poettersonden® is formed from the pure unadulterated dynamic pressure of the inflow surface and the static pressure of the outflow surface. The very low frictional resistance which forms on the laminar sliding layer of the smoothly milled surface of the Poettersonde® cannot even be calculated as it is far too low. In addition, the dynamic pressure of Poettersonden® dissolves completely in the frictional resistance (see Eulersches/d'Alembert's Paradox) and thereby works almost without pressure loss compared to conventional pitot tubes. Poettersonden® are not negatively influenced in linearity by the expansion coefficient (as they are constant). Disturbances caused by vortices, vortex brakes or expansion coefficients do not occur either. Even very high Reynolds numbers do not lead to the feared change of separation with Poettersonden®. This is the most important prerequisite for high-precision balances up to high Re ranges, e.g. with high-pressure steam. The very high accuracy of Poettersonden® is explained by the laws of physics.

The knowledge about the flow behaviour of Poettersonden® is based on extensive research, relevant scientific literature and a research project at the University of Magdeburg. The statements on the vortex behaviour of Pöttersonden® were very clearly confirmed. The high accuracy of Poettersonden® has also been tested and confirmed in the wind tunnels at the Institute of Fluid Mechanics of the Technical University Erlangen, the PTB in Braunschweig and the University of Applied Sciences Cologne.